The Journey of a Hat Photograph

The Journey Of A Hat Photograph.

I want to share with you the journey of a millinery photograph. I thought it might be interesting to run through some of the steps I do in getting to a final image. Final is an interesting word as I am always looking at room for improvement. When a hat is placed on a model’s head that is only the beginning of the photograph’s journey. A lot can happen, both before and after, the clicking of the shutter. I have always seen the act of photographing as a means to an end. What has been planned before the shoot and what happens after are what excites me.

When I am editing I think “would this make a great music album cover?” I grew up heavily influenced by album cover artwork.

For this example I used an image that I photographed for Angela Elliott of Elliotts Millinery. Angie selected The Portrait Kitchen to photograph ‘The De Havilland Collection’ that she had created. Her work is so good that it was featured as ‘Hat of the Month’ in Hatalk magazine.

Big influences on Angie are vintage Hollywood, 1940’s and 1950’s glamour, the style of photographer Norman Parkinson. That worked for me because Norman Parkinson and his portrayal of women in high fashion is what got me into photography.

The goal for me is to create an image that a picture editor of a fashion magazine would put on their front cover.

We had a really good model for this shoot, Xenia, who is based in Sheffield and travelled down to The Portrait Kitchen. She is extremely professional and has a look that stops you in your tracks. Angie had identified Xenia and managed all the pre-shoot discussions with her. The striking thing about Xenia is that she has an uncanny resemblance to British musician Dua Lipa and I liked the fact that we were mixing a retro look with a modern twist so it respected the styles of the past whilst at the same time looking in a forward contemporary direction, for a new generation.

Big treat on the day. Angie came with her partner Jeff and her dog Mae. We love having dogs at our shoots!

Xenia was ready to shoot within 20 minutes of arriving. Angie, (the client as opposed to Anjee my wife who is the shoot manager), had briefed Xenia in advance as to what she wanted in terms of looks and the style goals. This included make up style, clothing and accessories. Pre-shoot collaboration is so important. As with most creative processes, the planning is everything and ensuring that all parties are well briefed. Good communication is vital.

The backdrop is a roll of 1.35m Colorama paper (aqua) attached to a bracket high up on the wall. The bracket holds up to three rolls and we have a choice of about fifteen colours. Before a shoot we have an initial discovery call with the client. During this we can better understand their goals and what they want to achieve from working with us. are asked which three colours they would like. 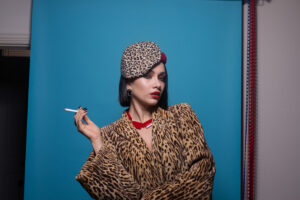 In this image there is a lot of stuff going on around the main subject. You can see our kitchen door, into our hallway, the cable pulls for the rolls so the first thing I always do when in edit mode after a shoot is crop the image. All of the artefacts and anything irrelevant  that does not add to the image needs to be removed. At the moment they are a distraction and do not convey what we are trying to achieve. 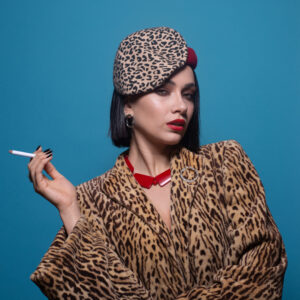 As you can see from the second picture we now have a much better composition starting to form. The image is becoming more interesting, we are being drawn in. All crops to images (in fact all of my edits and adjustments) are non destructive so I can always go back a few steps or right back to the start when the shot was taken.

This is also where a good model can make all of the difference by the way she looks, positions herself and the character she creates or is directed to create.

On the whole I’m pleased with this but there are still some edits and retouches we can do to really make this image stand out even more. Flyaway hairs need brushing out. There is also work that can be done on the skin because I am trying to create an underlying narrative. 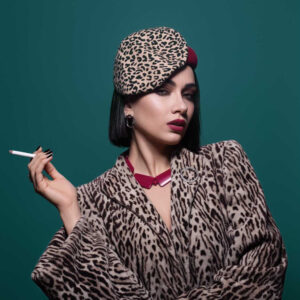 With the cigarette I am attempting to join up the past when cigarettes were a symbol of Hollywood glamour to the present or future. The cigarette is controversial because smoking is not socially acceptable. But it also shows attitude, a woman making her own choices in spite of what society says she should do.  As an irony, Xenia does not smoke so we used a theatrical cigarette that I bought off Amazon for £2.49.

Xenia’s skin is superb but I wanted to make it look a little bit more futuristic so there is a contrast between the retro Hollywood look and using Xenia as a kind of Rachael from Bladerunner look. Angie was less keen and felt the skin was over baked. Because the skin smoothing is controllable I could provide Angie with what she wanted by reducing the opacity of the effect.

I carried on with my own creativity. I tend to do this a lot, at no charge, because I like exploring possibilities as well as learning new editing skills. As long as our client is happy with what they want I can then add my own interpretations.

There are a few other changes that have been completed at this stage of the retouch. Colour grading being one. Look at the background. There is less blue and more green. Also the colour of the coat. It bothered me that they didn’t match so a retoucher I know (thanks Olena), matched the colours for me. The colours of the lips, necklace and hat base were all matched for continuity. Flyaway hair was also removed. I didn’t remove it all because as any woman knows, hair is never perfect. 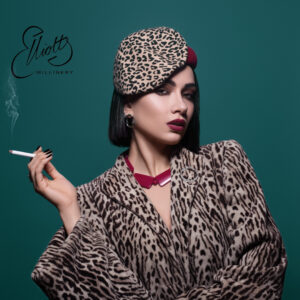 The final tidy up is about small but important detailing. I added a smoke overlay via Photoshop to give the effect that our fake cigarette was not fake. I also added Angie’s logo. It does a good job filling in the empty ‘dead’ space in the top left hand corner as well as promoting her brand. The image was sized and optimised for uploading to Instagram, as well as print.

Finally I decided to add a short before and after video so you can see the difference between the initial crop and the look Angie liked. You can click to see it here.

The whole process for this one image retouch probably took about 1-2 hours. There is a significant amount of to-ing and fro-ing with the client to ensure they like what I am doing. With technology this can be done so much more easily with version controls. It doesn’t matter where the client is because of the Internet.

The goal is to create something that stands out and has a ‘wow’ factor by directing the model, utilising the full kit bag of photography and editing tools whilst ensuring that the client gets what they want from the shoot.

You can see a short behind the scenes (BTS) on TikTok of the shoot. Amazing what you can ‘cook’ in the kitchen. Finally, for those of you who like to know your photo gear, details are in this image in terms of the exposure settings. This was a two speed light (Yongnuo YN560IV’s) set up. One fired through a beauty dish and one from below fired through a translucent umbrella.

Shoot set up is about 40 minutes, 30minutes to return the space to a normal family kitchen.

This site uses Akismet to reduce spam. Learn how your comment data is processed.